For a sustainable hydrogen strategy rare platinum catalysts are needed. Due to the limited abundance on earth, SolarBioproducts Ruhr (Sbp) developed an innovative solution by replacing platinum with biocatalysts. On August 10, 2020 the results of the research study were published in the international journal “Proceedings of the National Academy of Sciences”.

As part of a sustainable hydrogen strategy, technologies such as proton exchange membrane electrolyzers have become the focus of current research and development. Here, distilled water is split into hydrogen and oxygen by means of an electric current. However, the production of such a fuel cell is associated with high costs, since the catalytic conversion to molecular hydrogen is performed by expensive and rare platinum catalysts. But where is all the platinum going to come from in the long run, since its abundance on earth is very limited. Sbp is working on an innovative solution to this problem.

Sbp is currently researching the development and feasibility of a bio-based fuel cell, or biofuel cell for short. The focus is on complex biomolecules from nature, so-called hydrogenases, which naturally occur in green algae and bacteria and have the ability to convert hydrogen with the help of an iron-containing cofactor. In the future, these biomolecules could replace platinum as an alternative catalyst in a fuel cell, since they convert hydrogen with a comparable high efficiency. Remarkably, they only require  iron instead of expensive precious metals. However, before a potential application takes place, these biocatalysts must be understood in detail in order to make them robust and efficient enough for an industrial use.

Sbp contributed to a better understanding of the basic reaction mechanism of these biocatalysts. For this purpose, they joined forces with experts from the Ruhr University Bochum and from the University of Oxford. Just like platinum catalysts, [FeFe]-hydrogenases require two protons and two electrons for reversible hydrogen conversion. For this work the researchers chose a combination of protein engineering and dynamic electrochemistry. “While protein engineering allows the structural and functional manipulation of the enzyme in a targeted manner, dynamic electrochemistry can be used to study reaction kinetics in detail,” explains Dr. Christina Marx, project manager at Sbp.

A coupled long-range mechanism is essential for catalysis

The research team manipulated the hydrogenases in such a way that the proton transfer was significantly slower. The subsequent electrochemical investigations then showed that the hydrogen turnover decreased significantly and that significant overpotentials were also required to catalyze the production or oxidation of hydrogen. The suddenly occurring overpotential requirements signal a significantly reduced efficiency of the biocatalyst. Ultimately, the researchers had indirectly reduced the rate of electron transfer by manipulating the proton transfer pathway. “Since the two transfer pathways are spatially separated from each other, we assume that a cooperative long-range coupling of both processes is fundamental for efficient catalysis,” summarizes Dr. Oliver Lampret, First author of the study. The results have now been published in the journal “Proceedings of the National Academy of Sciences”, PNAS for short. The article was published online on August 10, 2020. The findings should help to develop more efficient miniaturized hydrogenase catalysts for an application in biofuel cells in the future. 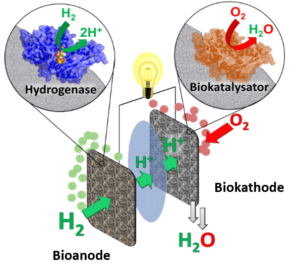 Structure of a biofuel cell. At the bioanode, green hydrogen is converted with the help of a biocatalyst called hydrogenase. This works as efficiently as platinum and thus generates electric current by splitting hydrogen.

Sbp thus underlines its versatile scientific expertise for a sustainability hydrogen strategy, which is focused in Herne site and is intended to contribute to the international community’s sustainable agenda 2030. The research cooperation with Prof. Armstrong from Oxford, England, which has existed for more than 10 years, also makes an important contribution to internationalization with excellent partners from science.